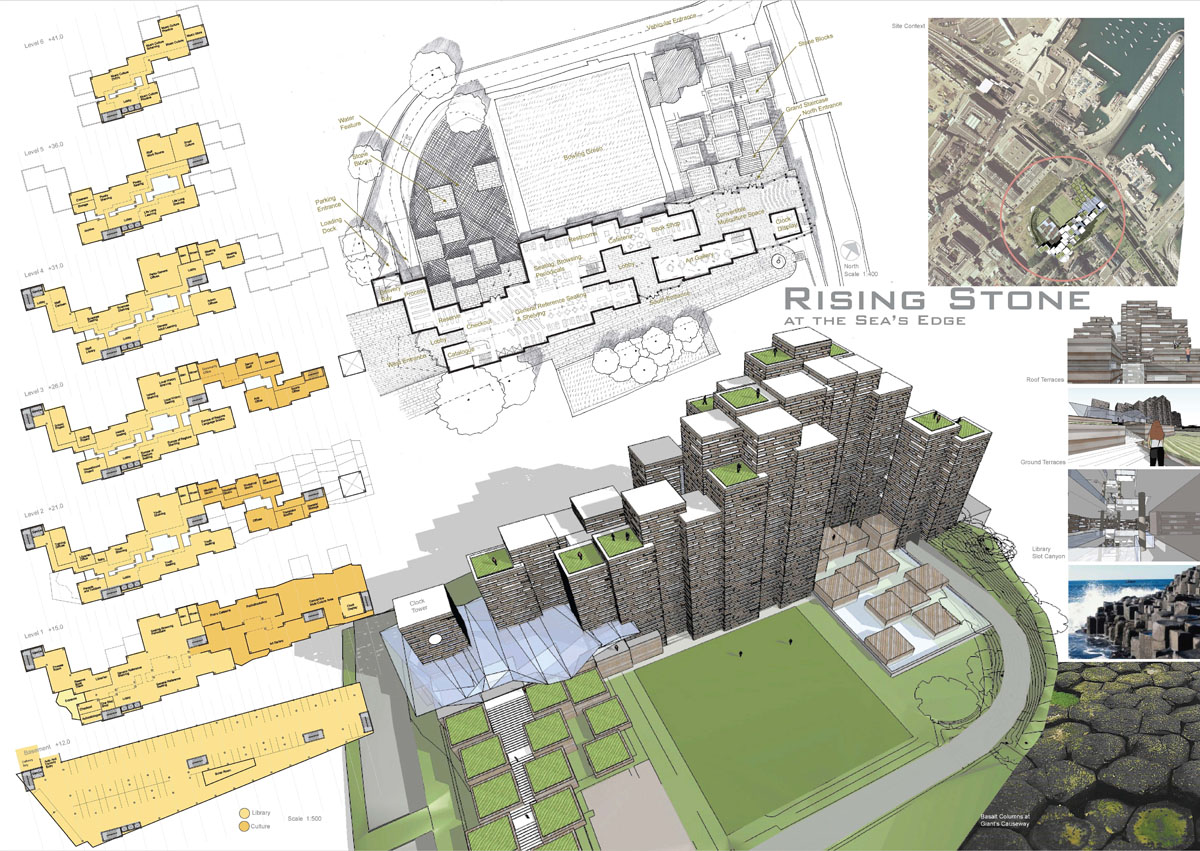 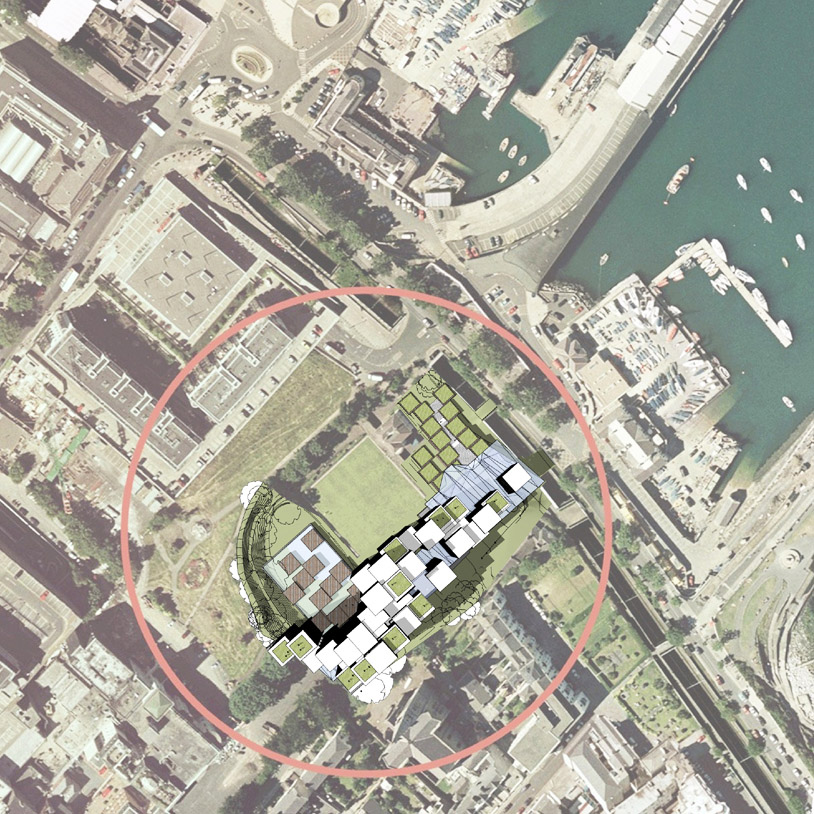 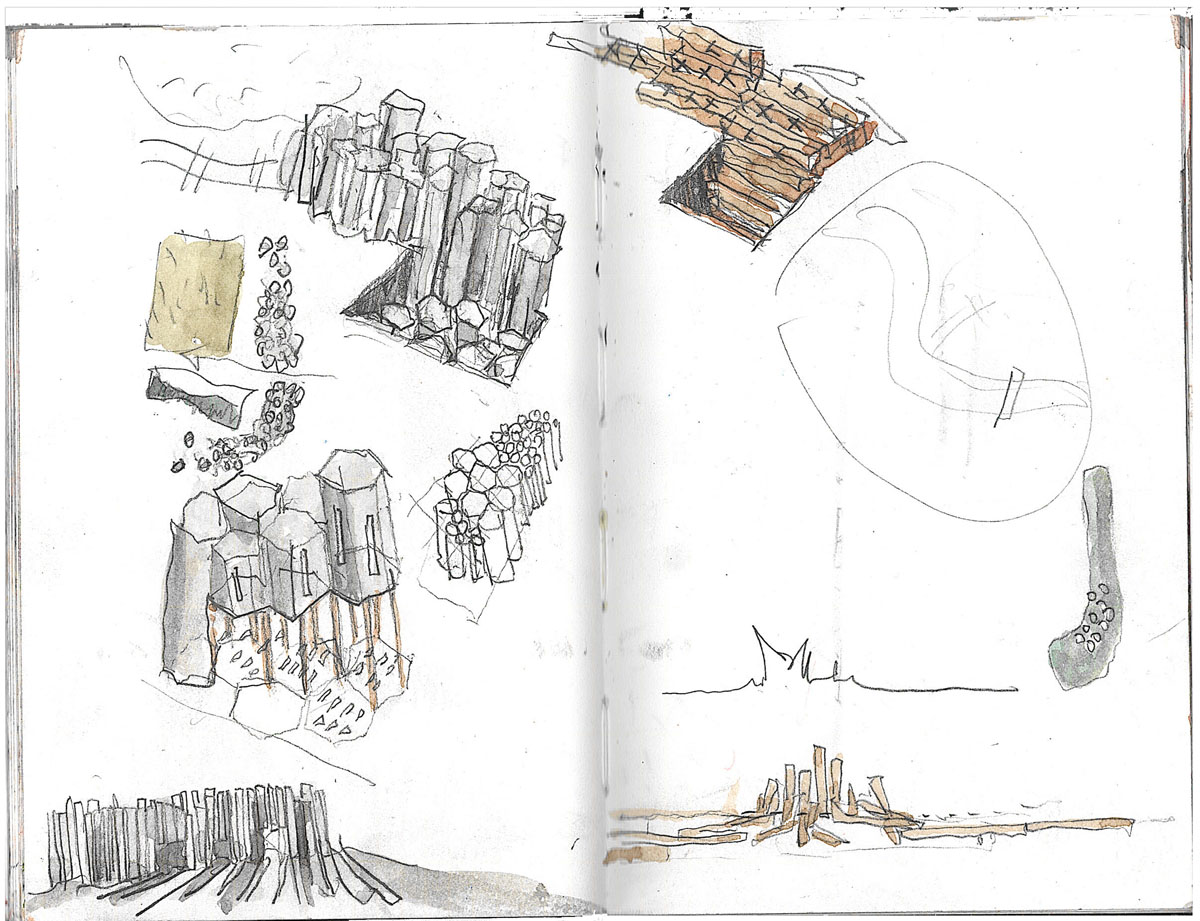 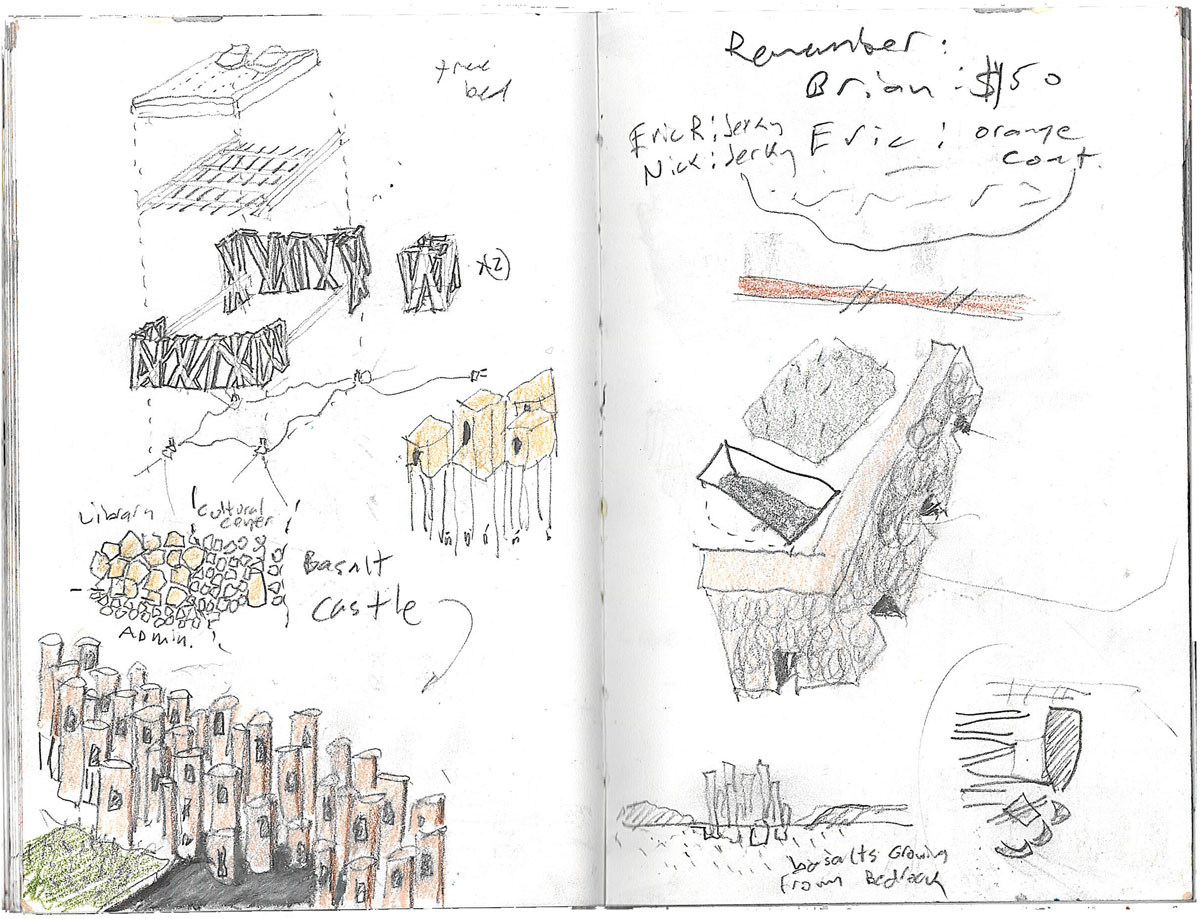 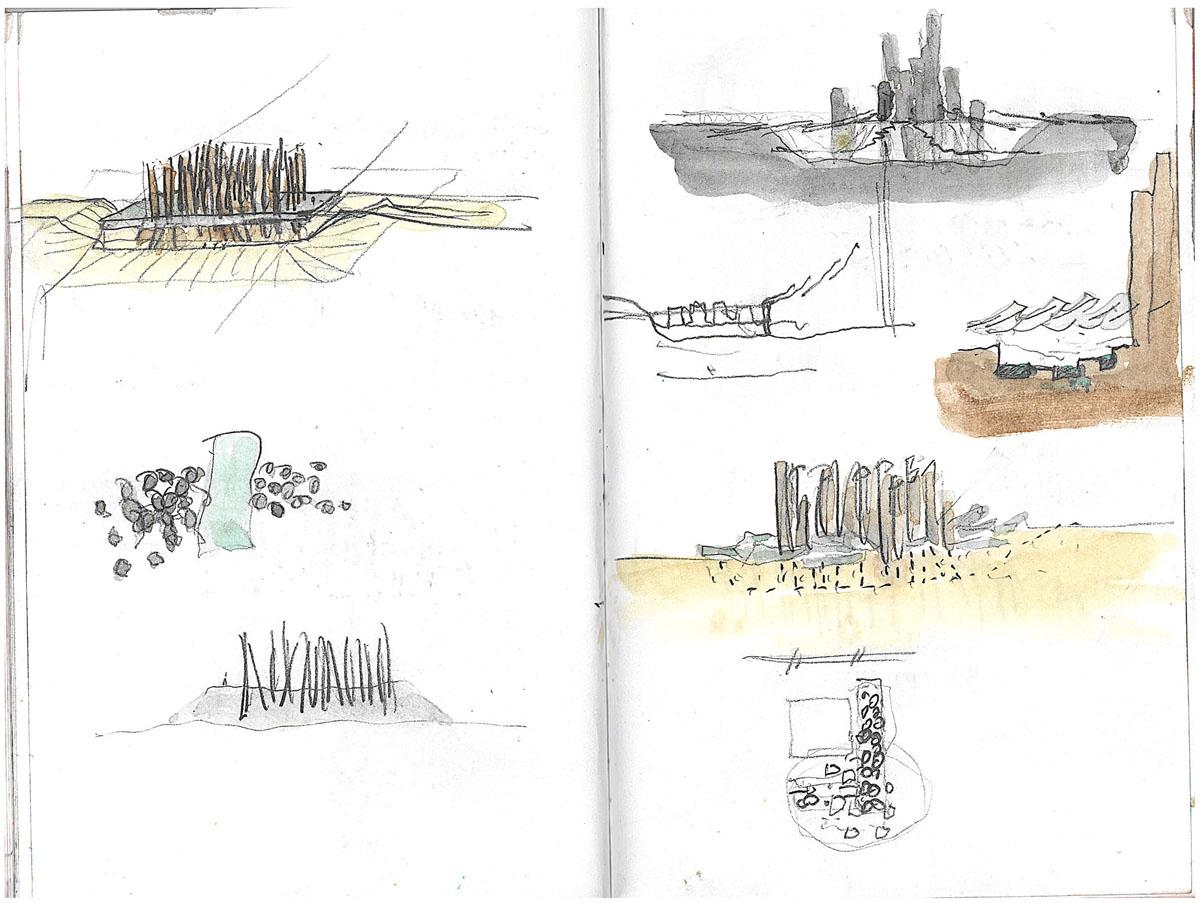 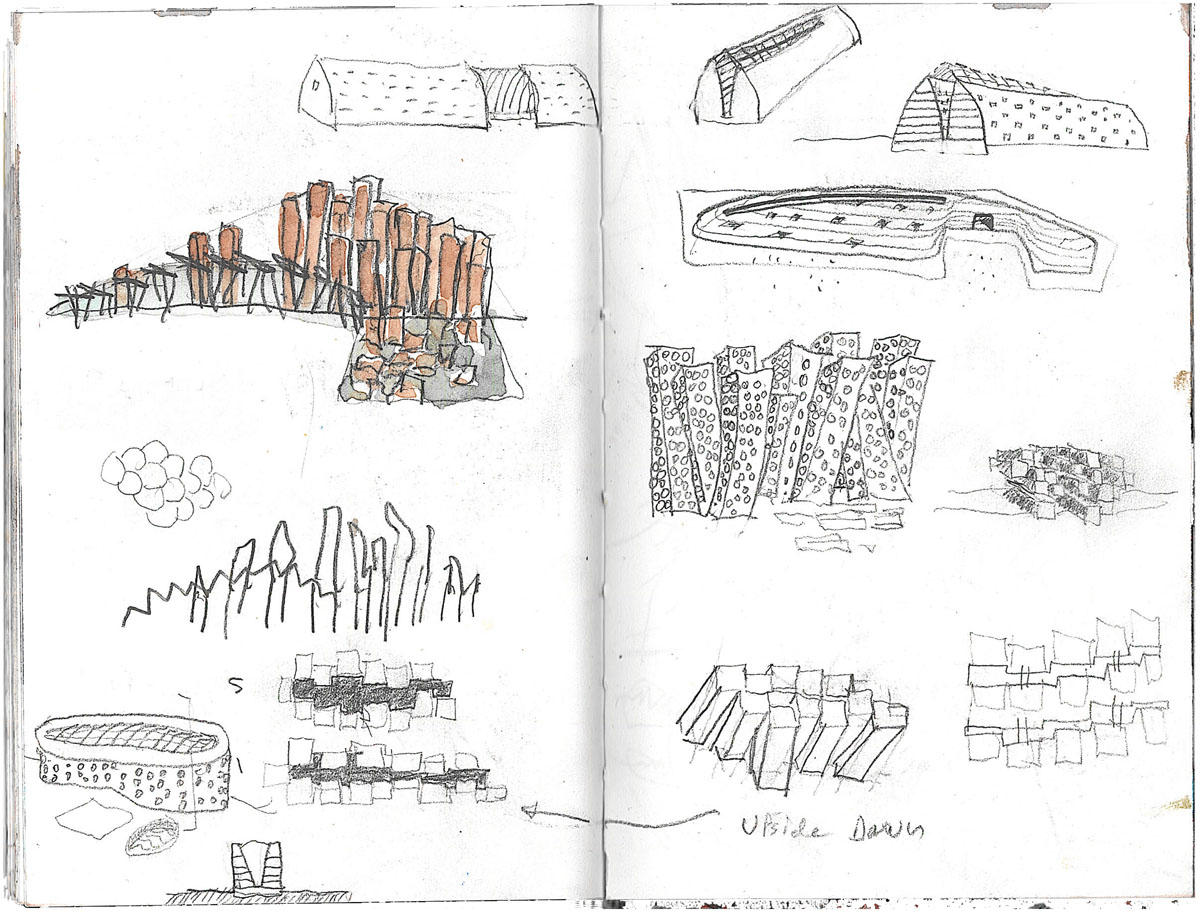 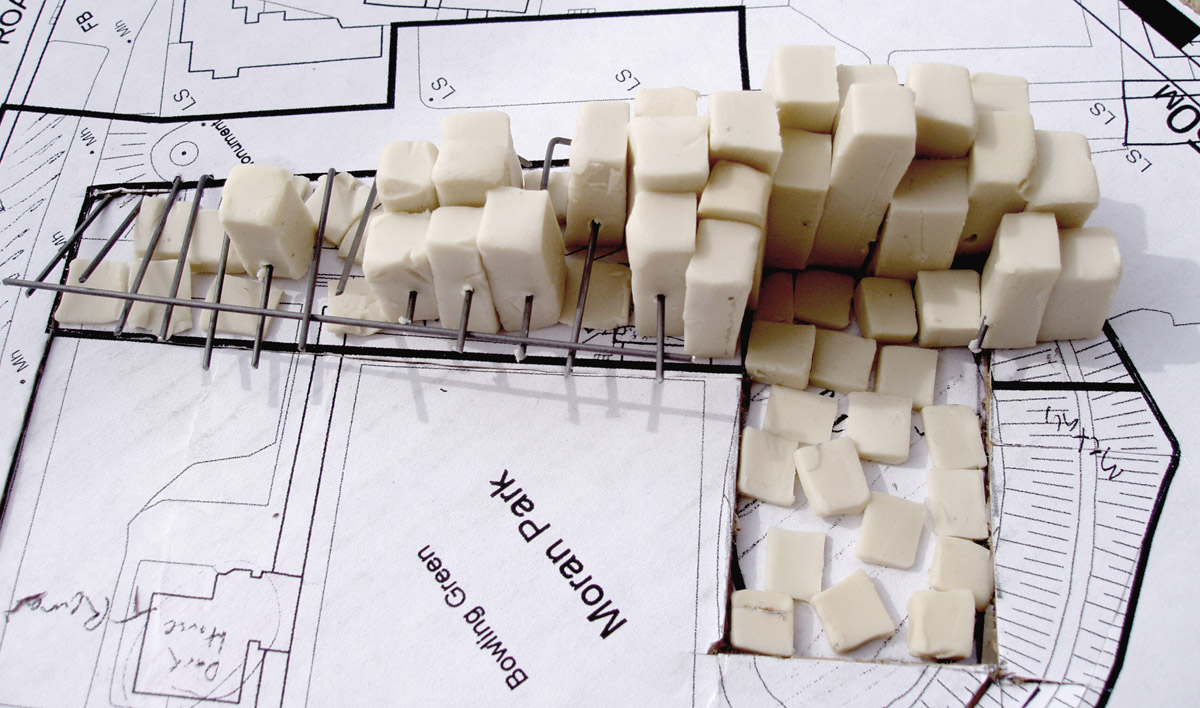 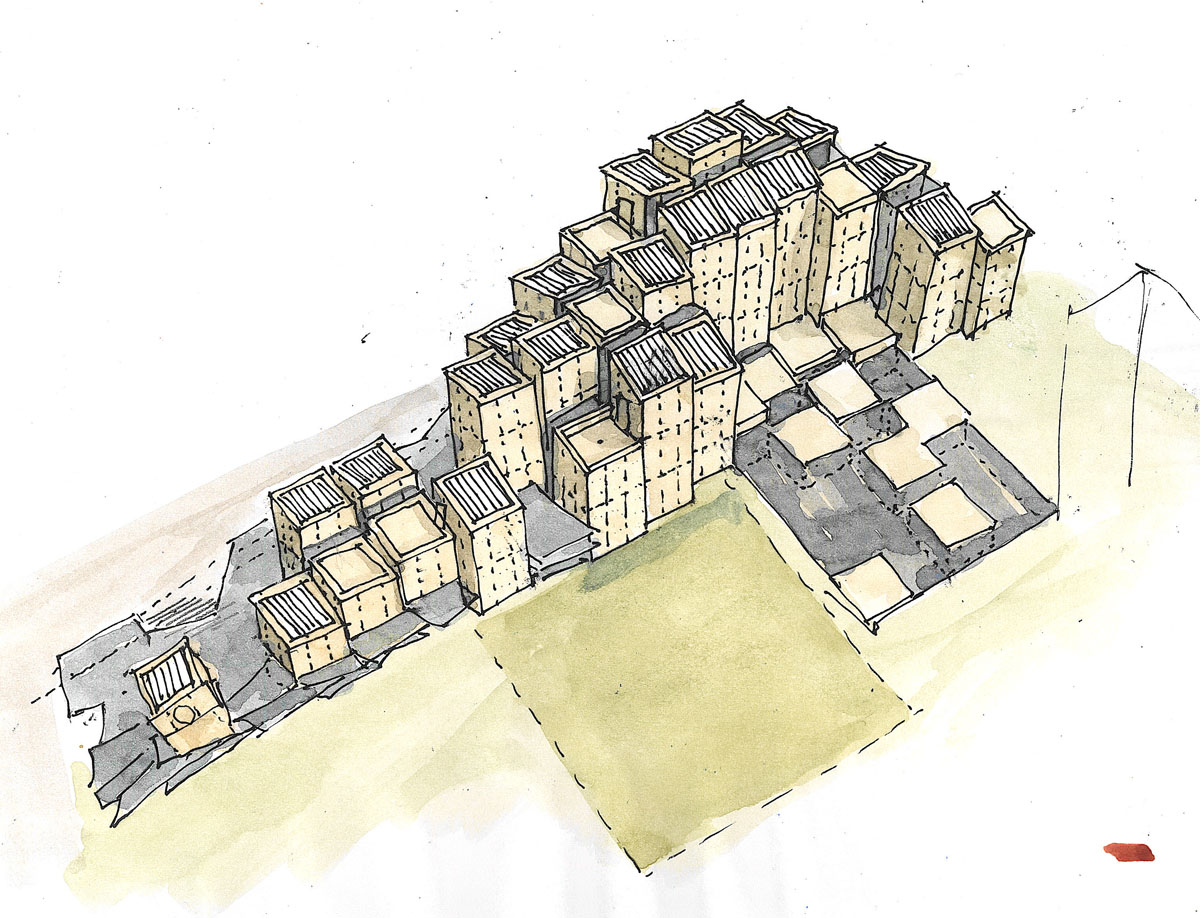 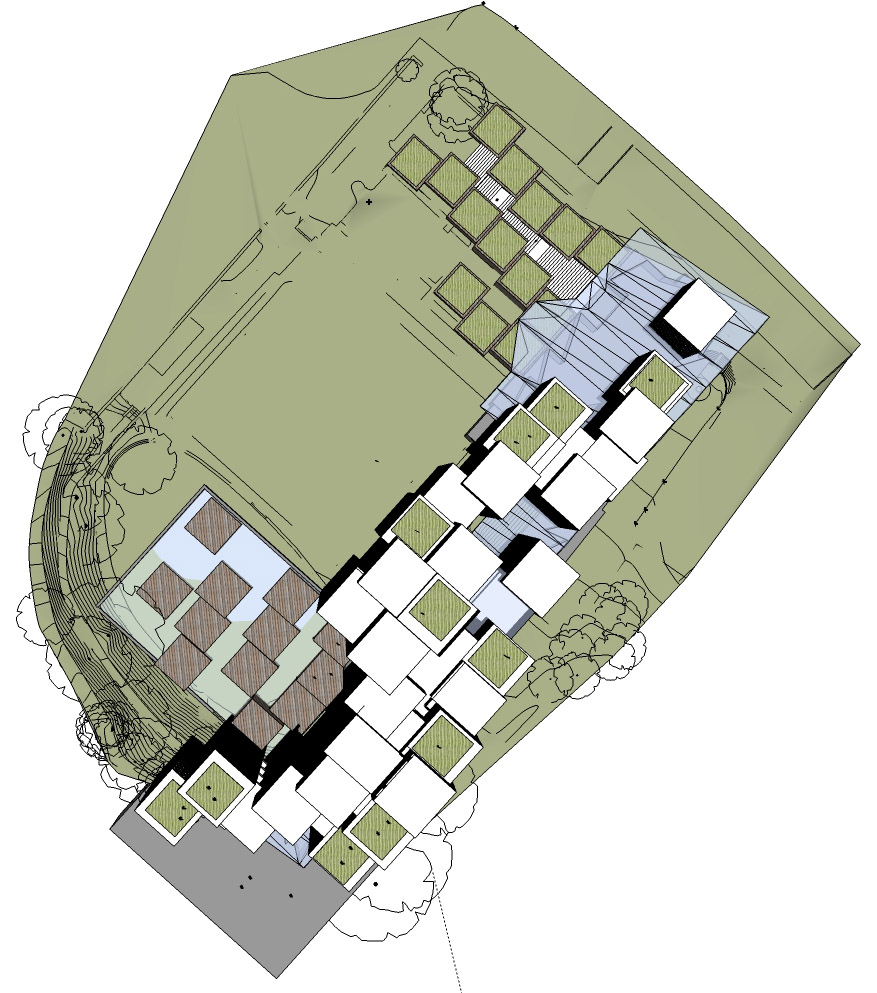 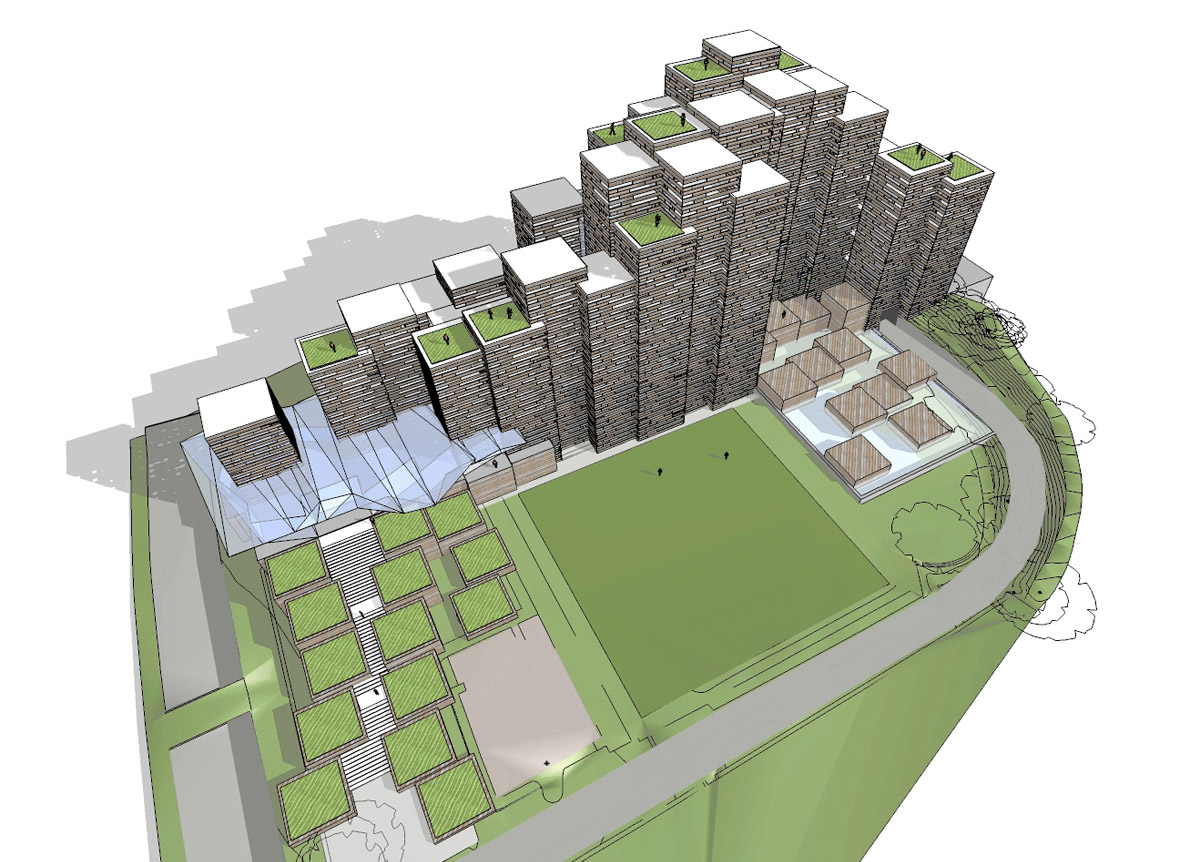 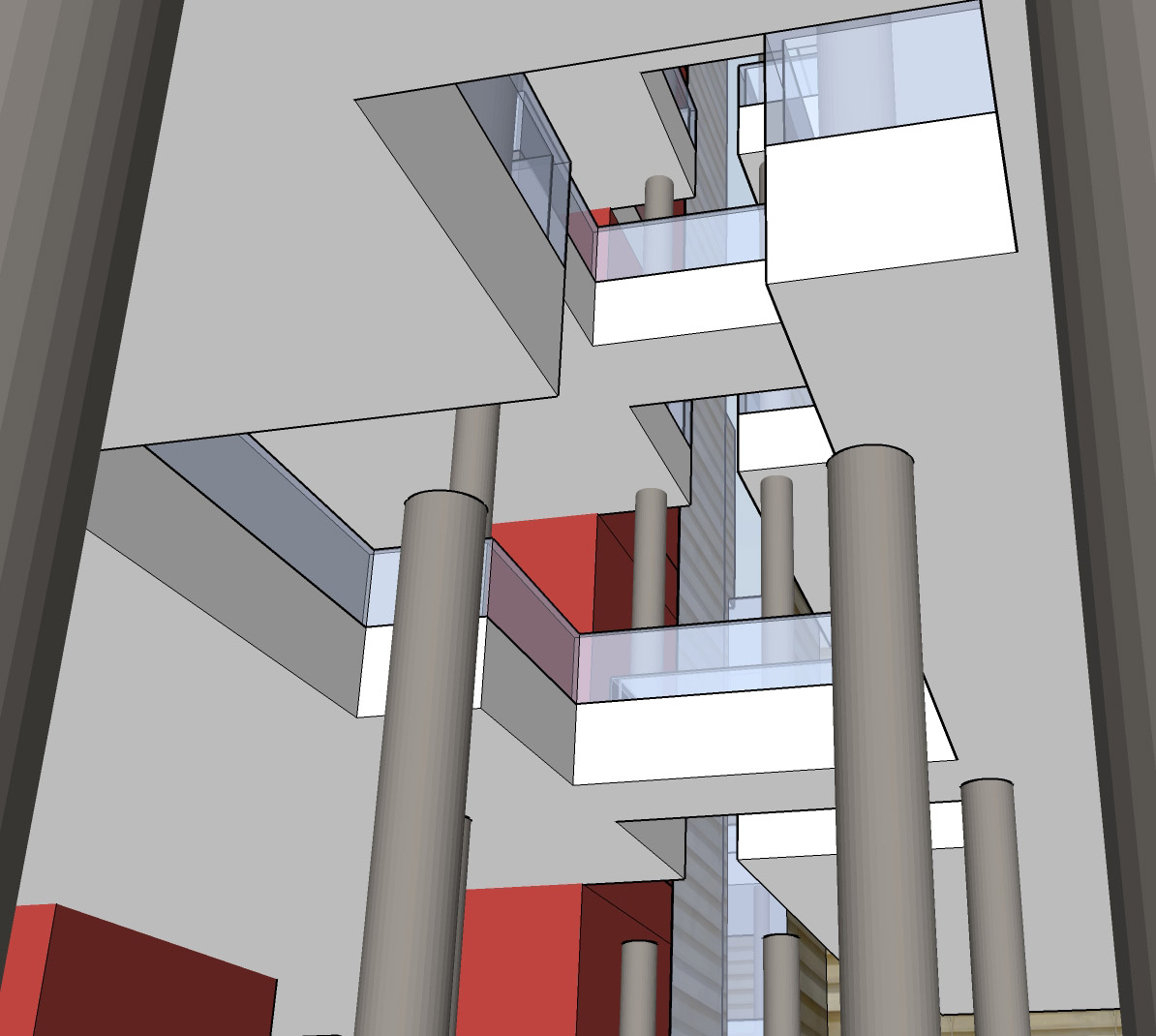 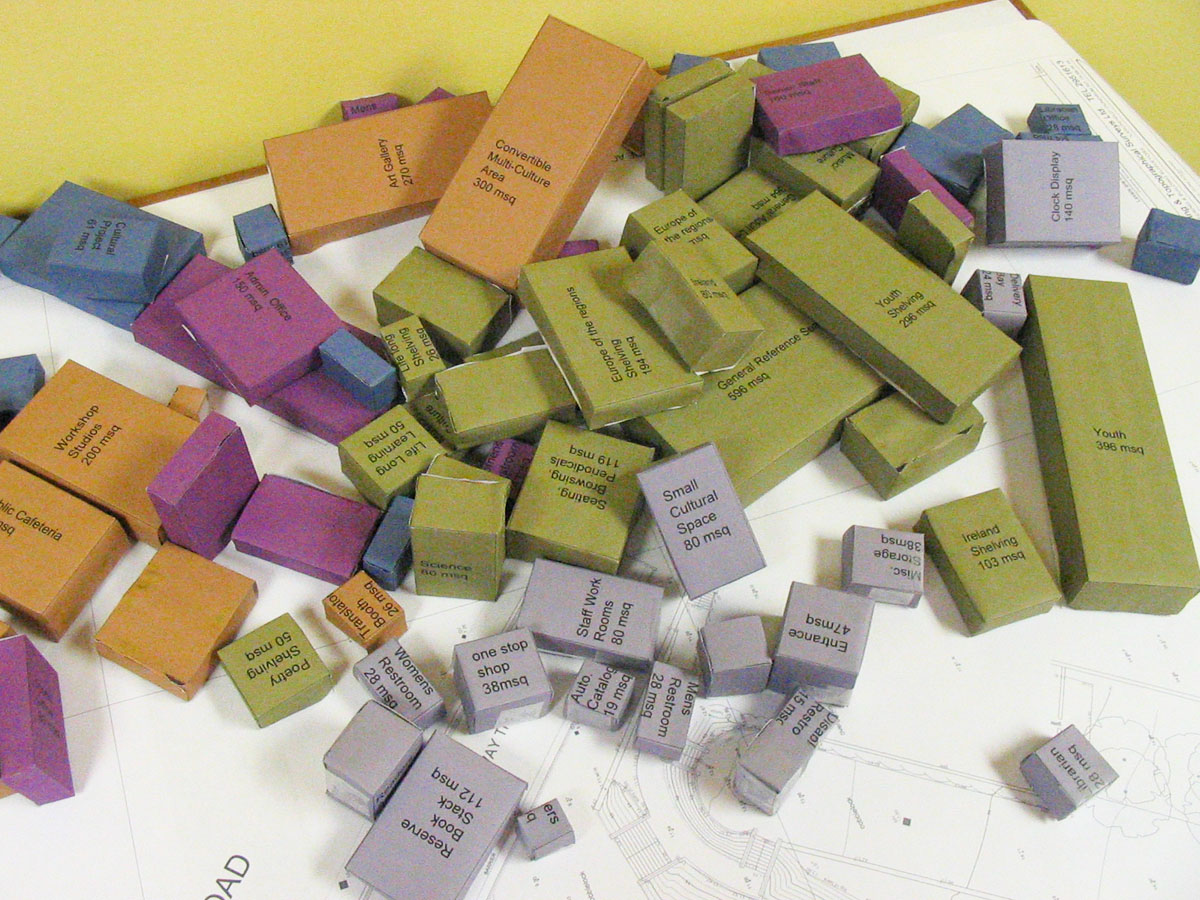 The city of Dún Laoghaire held an architectural design competition for a new central library and cultural center. Our proposal for the Irish library competition took its inspiration from the basalt columns at the Giant’s Causeway, a transition between earth and sea.  Solid stones rise from the earth and are subject to displacement and erosion from the sea.  Shifting within the cluster of towers leaves slot canyons that carve through the library’s varying height mass.  This proposal is to metaphorically generate a similar geomorphic event at the edge of Dún Laoghaire that celebrates the transition between earth and sea.

Physically, the building is based on a matrix of 7m. x 7m. tower-modules. Shifts in these towers create entrance spaces and cleave-framed views into and out of the library spaces. The building is roughly divided along the short axis, effectively creating two functional halves—the library on one side and cultural centre on the other. The ground level is designed to accommodate public functions, and the upper levels erode in size to accommodate more private and more esoteric functions.  The existing pond is reconfigured to be a continuation of the building’s growth from the earth. Large landscape blocks rise from the low waters giving form to the pond and creating a private plaza accessed from the library.

The heart of the building is a network of vertically oriented canyons that provide an exhilarating experience of moving through the building as well as a strong way-finding component. Numerous roof terraces are accessible from several library levels and provide added gardens and landscaped spaces.  Skin woven from ancient stone and glass create the exterior walls.  Staggered planes of translucent skylights create the roof. Together the basketlike skin and the transparent roof provide a wonderful sense of lightness to occupants of the new library.

The series of landscaped roof terraces and site plazas are designed to be ‘green roofs’ which add enormous thermal mass and insulating properties that limit the demand on the mechanical systems for both heating and cooling seasons.  The green roof terraces will be the initial filtration for the grey water system used for irrigation and toilet flushing. Additionally, the green roof system adds to the life span of the building by protecting the roof membrane from UV deterioration.